HisTochText - History of the Tocharian texts of the Pelliot Collection

This project has received funding from the European Research Council (ERC) under the European Union’s Horizon 2020 research and innovation programme (grant agreement No. 788205) 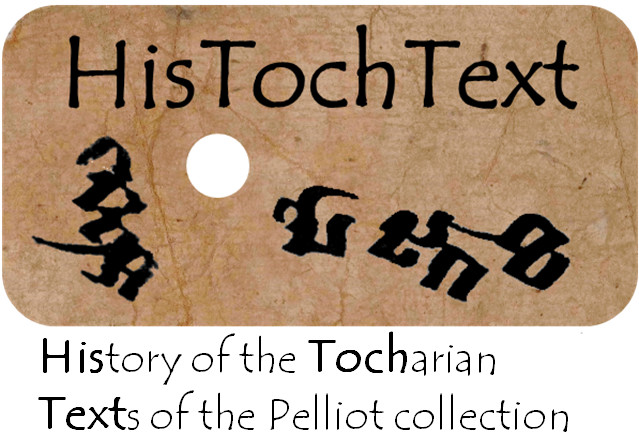 The term Tocharian is used to designate two closely related languages ​​of the Indo-European linguistic family, which were spoken during the 1st millennium CE in the west of China, in the region of Xinjiang, and precisely in the oases located on the northern fringe of the Taklamakan Desert. The manuscripts in these two languages ​​were mainly discovered in ruins of Buddhist sites: those, the most numerous, which belong to Buddhist literature were copied and preserved in monasteries. A significant number of secular texts, of economic and legal content, provide information on the social life of these principalities deeply influenced by the Buddhist culture which came from India around the turning of our era. These oases were distributed along the "Silk Road", which linked China to the western countries, and whose various branches were used for the transmission and the exchange of foodstuffs, and also of religions, techniques, artistic forms, and, last but not least, texts. Several explorers, archaeologists and philologists, including Paul Pelliot (1878-1945),discovered manuscripts in various languages ​​and scripts from this country, called "Serindia" (i.e., intermediary between India and China) by the famous explorer and archaeologist Marc Aurel Stein. In the Pelliot Collection ("fonds Pelliot) of the Bibliothèque nationale de France (BnF), the manuscripts in Tocharian come essentially from the same sites as the manuscripts in Sanskrit. Literary and religious texts in Tocharian are translations or adaptations of Buddhist texts in Sanskrit, and have parallels in other Buddhist languages. The HisTochText ('History of the Tocharian texts of the Pelliot Collection) project aims, in addition to the online publication of catalogues of Sanskrit and Tocharian collections on the site htttps://archivesetmanuscrits.bnf.fr and the editing of online texts, accompanied by digital photographs, the multidisciplinary study of these manuscripts by means of of all available methods. Its originality is to associate the actual textual analysis, carried out with the resources of philology, with the material analysis of the support of the manuscripts, which are mostly on paper, and a minority on wood. The aim is to restore the history of written Buddhist culture between 400 and 1000 AD, and to provide reliable databases for the study of paleography, the composition of Buddhist "books", and the practices of copyists, and the history of paper in Central Asia. The project is funded for five years, and associates EPHE philologists (post-docs and doctoral students) with researchers from the Conservation Research Center (CRC. USR 3224, National Museum of Natural History). It calls on international experts in the fields of paper (especially the Center for the Study of Manuscript Cultures, Hamburg), and of the philology of Buddhist texts, and includes collaborations with researchers working on comparable funds from other libraries and museums around the world.

This project is generously funded by the European Research Council, Program of the ERC Advanced Grant 2017 (project number 788205) from October 1st, 2018 to September 30th, 2023. It is currently maintained by the EPHE, 4-14 rue Ferrus. 75014 Paris. Section des Sciences historiques et philologiques.

The system is programmed in PHP. The automatically generated output is written in HTML5, additionally using CSS for formatting. JavaScript and Jquery are used - Version PHP 7.4.14

We welcome any kind of user feedback, be it on practical matters concerning the website or comments on and questions about the edition. Please contact with contact form provided.